Conference Series Ltd invites all the participants across the globe to attend 2nd Annual Conference and Expo on Biomaterials Madrid, Spain.

University of Texas at Dallas, USA

Keynote: Science and technology of multifunctional Ultrananocrystalline Diamond (UNCDTM) coatings and applications to a new generation of implantable medical devices

Orlando Auciello graduated with MS (1973) and PhD (1976) degrees in Physics from the Physics Institute “Dr. Balseiro” (Universidad Nacional de Cuyo-Argentina). He is an EE at the University of Córdoba, Argentina (1970), Researcher at the University of Toronto, Canada (1979-1984), Associate Professor at NCSU, USA (1985-1988), Distinguished Scientist at MCNC, USA (1988-1996), and Distinguished Argonne Fellow (1996-2012) at Argonne National Laboratory, USA. Currently, he is a Distinguished Chair at University of Texas at Dallas. He is directing basic and applied research programs on multifunctional oxide and novel Ultrananocrystalline Diamond (UNCD) thin films and their application in industrial, high-tech, and medical devices. The UNCD film technology is commercialized for industrial products by Advanced Diamond Technologies founded by him and his colleagues, (2003, profitable in 2014), and by Original Biomedical Implants (OBI-USA, 2013) and OBI-México (2016) for medical devices. He has edited 20 books and published about 500 articles in several fields, and holds 20 patents. He is an Associate Editor of APL and Integrated Ferroelectrics. He was the President of the Materials Research Society (2013) and a Fellow of AAAS and MRS.

New paradigms in the research and development of nanocarbon thin films are providing the bases for new physics, new materials science and chemistry, and their impact in a new generation of multifunctional biomedical devices. This talk will focus on discussing the science and technology of the new paradigm material named ultrananocrystalline diamond (UNCDTM) in thin film form and integration into a new generation of medical devices and implants as described below: UNCD films co-developed and patented by O Auciello and colleagues are synthesized by novel microwave plasma chemical vapor deposition and hot filament chemical vapor deposition techniques using an Ar-rich/CH4 chemistry that produces films with 2-5 nm grains. The fundamental science underlying the synthesis and properties of the UNCD films and applications to devices will be discussed. The UNCD films exhibit the lowest friction coefficient (0.02-0.04) compared with metals (≥0.5) currently used in many prostheses (e.g., hips, knees), electrically conductive UNCD coatings with nitrogen in grain boundaries can enable a new generation of neural electrodes, UNCD coatings are extremely biocompatible. Original Biomedical Implants (OBI-USA) and OBI-México, founded by Auciello and colleagues, are developing new generations of implantable medical devices based on the biocompatible UNCD coatings, namely: a) UNCD-coated silicon based microchip implantable inside the eye as a key component of the artificial retina to return partial vision blind by genetically-induced degeneration of  photoreceptors; b) new generation of Li-ion batteries with ≥10x longer life and safer, using UNCD-based electrodes, membranes and inner wall battery case, enable next generation of defibrillator/pacemakers; c) new generation of implantable prostheses (e.g., dental implants, hips, knees) coated with UNCD eliminates failure of current metal-based implants due to synergistic mechanical wear/chemical corrosion by body fluids; d) UNCD-coated polymer with brain neurons tailored stiffness enables next generation less invasive electrodes for neural stimulation. 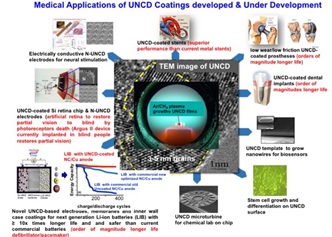 José Manuel Baena, MSc is a Research Associate. He is the Founder of BRECA Health Care, pioneer in 3D printed custom made implants for orthopedic surgery, and REGEMAT 3D, the first Spanish bioprinting company. He is an expert in innovation, business development and internationalization. He is a Lecturer in some business schools, and  is passionate  about Biomedicine and Technology. In his free time, he also works as a Researcher at the Biopathology and Regenerative Medicine Institute (IBIMER).

Tissue regeneration (TR) is currently one of the most challenging biotechnology unsolved problems. Tissue engineering (TE) is a multidisciplinary science that aims at solving the problems of TR. TE could solve pathologies and improve the quality of life of billions of people around the world suffering from tissue damages. New advances in stem cell (SC) research for the regeneration of tissue injuries have opened a new promising research field. However, research carried out nowadays with two-dimensional (2D) cell cultures do not provide the expected results, as 2D cultures do not mimic the 3D structure of a living tissue. Some of the commonly used polymers for cartilage regeneration are Poly-lactic acid (PLA) and its derivates as Poly-L-lactic acid (PLLA), Poly(glycolic acids) (PGAs) and derivates as Poly(lactic-co-glycolic acids) (PLGAs) and Poly caprolactone  (PCL). All these materials can be printed using fused deposition modelling (FDM), a process in which a heated nozzle melts a thermoplastic filament and deposits it in a surface, drawing the outline and the internal filling of every layer. All these procedures uses melting temperatures that decrease viability and cell survival. Research groups around the world are focusing their efforts in finding low temperature printing thermoplastics or restricted geometries that avoid the contact of the thermoplastic and cells at a higher temperature than the physiologically viable. This mainly has 2 problems; new biomaterials need a long procedure of clearance before they can be used in clinical applications, and restrictions in geometries will limit the clinical application of 3D printing in TE. We have developed an enhanced printing process named Injection Volume Filling (IVF) to increase the viability and survival of the cells when working with high temperature thermoplastics without the limitation of the geometry. We have demonstrated the viability of the printing process using chondrocytes for cartilage regeneration. This development will accelerate the clinical uptake of the technology and overcome the current limitation when using thermoplastics as scaffolds. 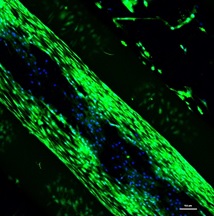